Medicine (noun)
a compound or preparation used for the treatment or prevention of disease, especially a drug or drugs taken by mouth

As we are all aware, medicines to treat multiple sclerosis are not cheap, nor are they affordable. But many of us, myself included, will agree that they are part of what keeps us moving, literally. Admittedly many of us pay little or nothing out of pocket owing to patient assistance programs, but those programs wouldn’t be needed if the cost wasn’t astronomical out of the gate. And to clarify, I am not talking about new medicines, although that’s helping to drive the problem, I’m talking about medicines that have been on the market for many years, like Avonex.

When I started on treatment in June, 2009, Avonex retailed at $26k per year. Fast forward to 2019, and take a guess, no really, take a guess what a drug approved in 2002 costs, give up? On average, about $87k per year, give or take, so a $60k increase in just 10 years. And each time I receive the insert for my quarterly supply, it goes up, and up, and up, and up. I used to feel bad about having to take a medicine that was so expensive, but considering my contributions to society, and the taxes I pay, it means I continue to contribute to the cost of developing medicines. So round and round we go.

While it’s true that the list price is rarely paid by anyone, having that be the ceiling means that people also pay more out of pocket (co-pay) when all is said and done. And people on Medicare and Medicaid are unable to participate in the patient assistance programs, thanks to president 43. Nor are government agencies able to negotiate the cost of medicines, like every other developed country, which means the United States is subsidizing the cost of research and development for the rest of the world.

Patents also factor into the costs of meds, but explaining that, would quite literally, do your head in. And most recently the skyrocketing cost of insulin and epipens, which leads to rationing (and do you take your insulin or eat?), and subsequently people being sicker, which in turn impacts the cost of their healthcare (and everyone’s).

For this post I will only be looking at people who have insurance. The next image is clear as mud since there are so many hands in the cookie jar, and because if you try to ask the cost of a medicine, you will get 100 different answers and that’s based on how the hands all negotiate the list price. Next to housing, healthcare is the biggest expense most people have, and yet we have no say in negotiating costs, unlike just about every other big expense in our lives. 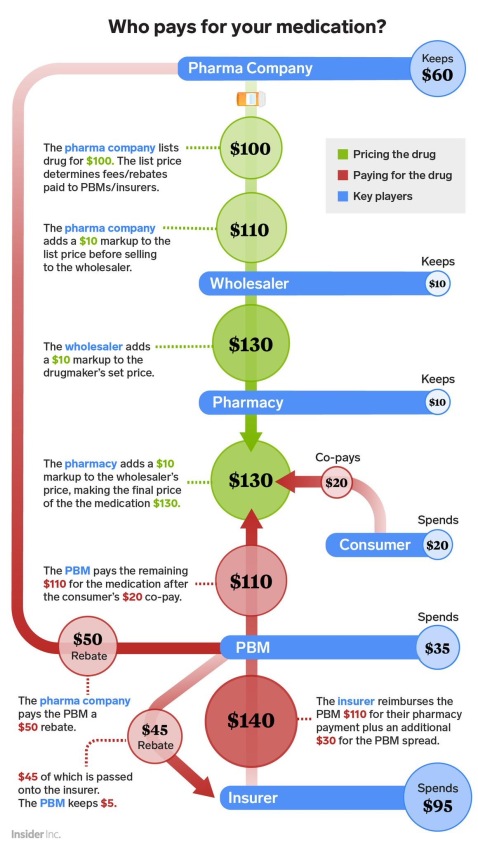 We have the pharmaceutical company, the insurance company, the pharmacy benefits management (PBM) companies, and the consumer (general public). And some might also include politicians, since they get their share as well (contributions to the committee members referenced below), but in a different way. Though one can argue that campaign contributions also add to the high cost of medicines (see Citizen’s United – the content of the advertising speaks for itself).

Everyone above takes their cut, mind you, while I have issues with insurance companies arbitrarily deciding what medicines people should be allowed to take (a decision that SHOULD be between my doctor and me), the PBMs such as Express-Scripts (Accredo), CVS Caremark, etc. are just plain scourge of the earth. I have been doing battle with them for years. These are two of the largest PBMs thanks to monopolies and insurance companies buying them up. See the complaints for both Express-Scripts and CVS Caremark and these are just from Consumer Affairs. Facebook and Twitter are riddled with 10s of thousands of complaints about both companies.

The argument is that mail order / specialty pharmacies are better suited to taking care of medicines for diseases like MS, and I can tell you that this is just.not.true.! Imagine having to beg a giant corporation to do their job effectively, like something as basic as ordering a refill on an app, and that refill never being transferred to the specialty arm of the pharmacy. And financially, my local pharmacy has told me time and again, that they can, and do, handle specialty medicines with ease. And having that personal connection to someone is way better than talking to a toll-free number, where they couldn’t care less about whether or not your medicine is delivered on time or within proper temperature controls.

So while I will never begrudge a company making a profit, unnecessarily high costs (set by pharmaceutical companies), stop gaps (PBMs), and senior leadership salaries and bonuses, on the backs of people who need these medicines, is downright offensive. On top of that, direct to consumer marketing, only allowed in the United States, and New Zealand, is a $10b a year (U.S.) expenditure. As the saying goes, if it didn’t work, they wouldn’t do it.

Pharmaceutical companies argue that raising the cost of current medicines is what allows them to develop new and innovative treatments. However consider that basic research is typically started at the NIH, and then the pharmaceutical industry runs with it, taxpayers (us) already fund part of the development of medicines.

On Monday, February 25, congress held a public all day session with the top seven pharmaceutical companies. I have worked in the industry for almost 25 years, and even I learned from watching it. Albeit long,  it’s definitely worth it to understand the issues and challenges. And I can also say that all of the colleagues I have encountered over the years, do genuinely want to find cures and help people living with diseases. At issue is having shareholders and developing medicines for people who need them, is, in fact, an ultimate conflict of interest.

“What keeps you up at night?”
None of heads of the companies said – the cost of medicines

Why in the United States do some think that healthcare should be a privilege, as opposed to a birth right? Cost of medicines is a highly complex issue, but does it need to be?

When subscribing to the blog, please check your email (in box and spam/junk) for the confirmation note. Once you confirm, you’re good to go and will receive posts.